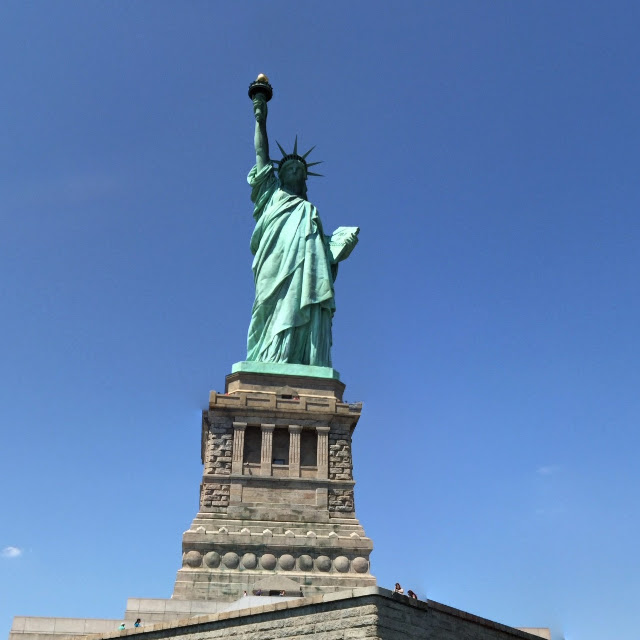 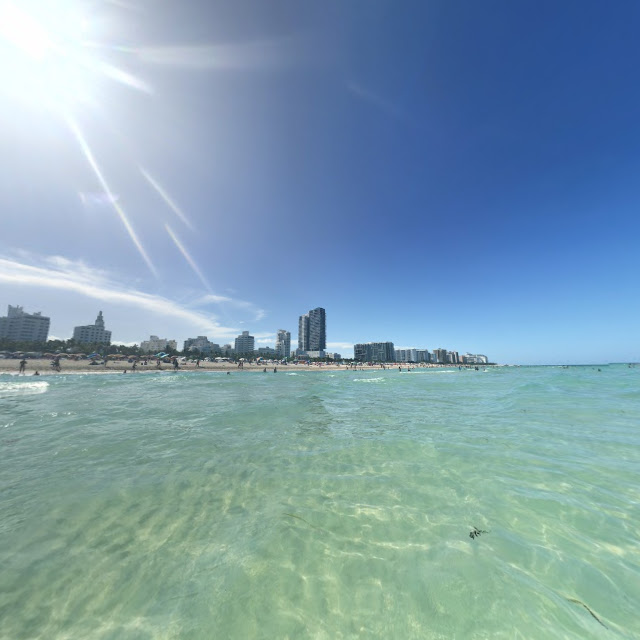 Open in 360° mode
Miami Beach is a coastal resort city in Miami-Dade County, Florida, United States. It was incorporated on March 26, 1915. The municipality is located on natural and man-made barrier islands between the Atlantic Ocean and Biscayne Bay, the latter of which separates the Beach from Miami. The neighborhood of South Beach, comprising the southernmost 2.5 square miles (6.5 km2) of Miami Beach, along with downtown Miami and the Port of Miami, collectively form the commercial center of South Florida. 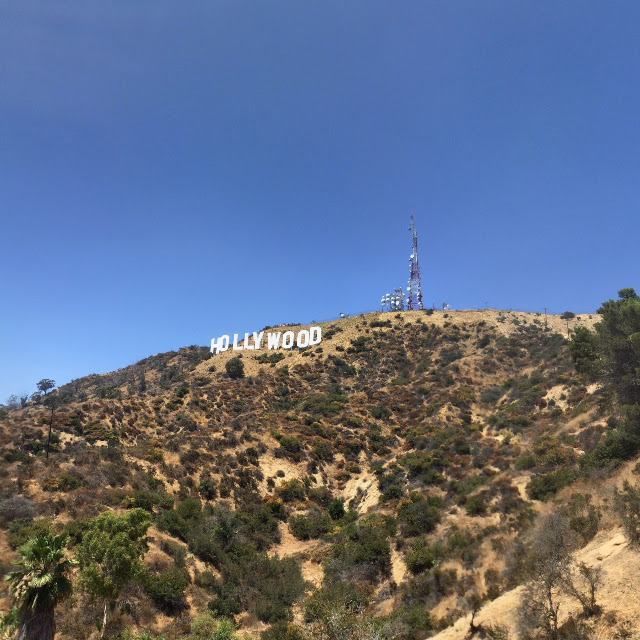 Open in 360° mode
The Hollywood Sign (formerly the Hollywoodland Sign) is a landmark and American cultural icon located in Los Angeles, California. It is situated on Mount Lee, in the Hollywood Hills area of the Santa Monica Mountains. The sign overlooks Hollywood, Los Angeles. 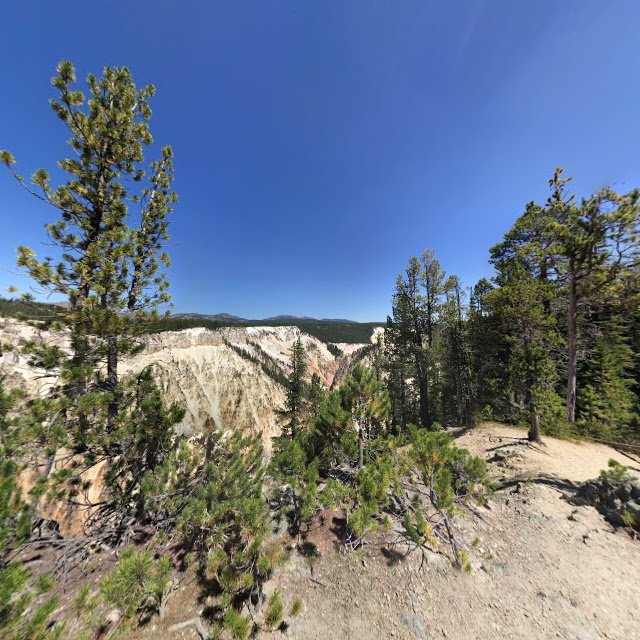 Open in 360° mode
Yellowstone National Park is a national park located in the U.S. states of Wyoming, Montana, and Idaho. It was established by the U.S. Congress and signed into law by President Ulysses S. Grant on March 1, 1872. Yellowstone was the first National Park in the U.S. and is also widely held to be the first national park in the world. The park is known for its wildlife and its many geothermal features, especially Old Faithful geyser, one of its most popular features. It has many types of ecosystems, but the subalpine forest is the most abundant. It is part of the South Central Rockies forests ecoregion. 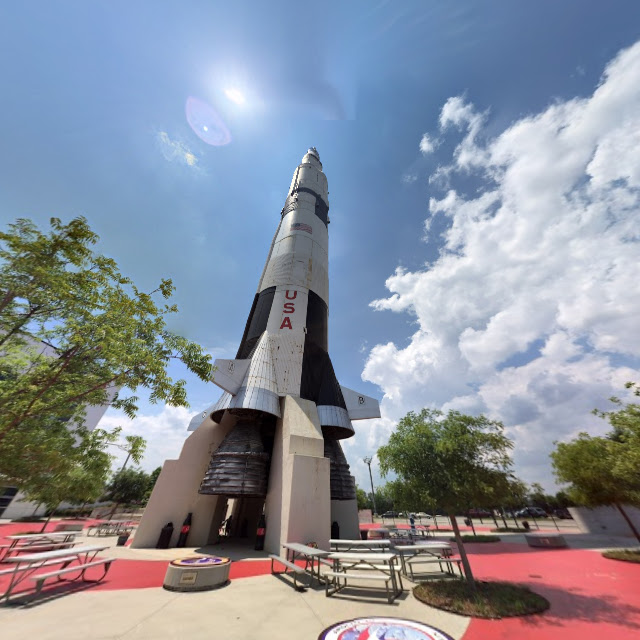 Open in 360° mode
The U.S. Space & Rocket Center in Huntsville, Alabama is a museum operated by the government of Alabama, showcasing rockets, achievements, and artifacts of the U.S. space program. Opened in 1970, just after the second manned mission to the lunar surface, the center not only showcases Apollo Program hardware but also houses interactive science exhibits, Space Shuttle and Army rocketry and aircraft. With more than 1,500 permanent rocketry and space exploration artifacts, as well as many rotating rocketry and space-related exhibits, the center occupies land carved out of Redstone Arsenal adjacent to Huntsville Botanical Garden at exit 15 on Interstate 565. 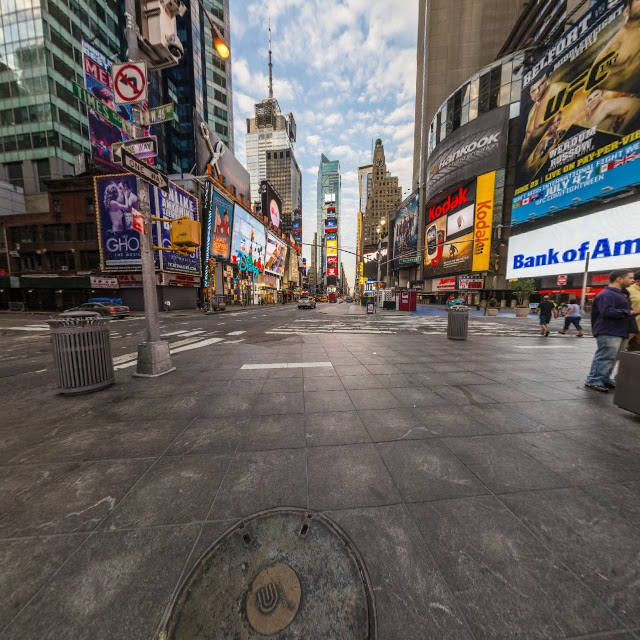 Open in 360° mode
Times Square is a section of Manhattan, New York City. It is a major center for tourism, show business and commerce. The square is at the meeting point of Broadway, Seventh Avenue and 42nd street. It is named for the New York Times which formerly had its main building there. One of the biggest stations in the New York City Subway system is under Times Square. The well-known city street area is probably most famous for its New Year's Eve ball drop that happens every year. It is one of the most famous sights of New York. 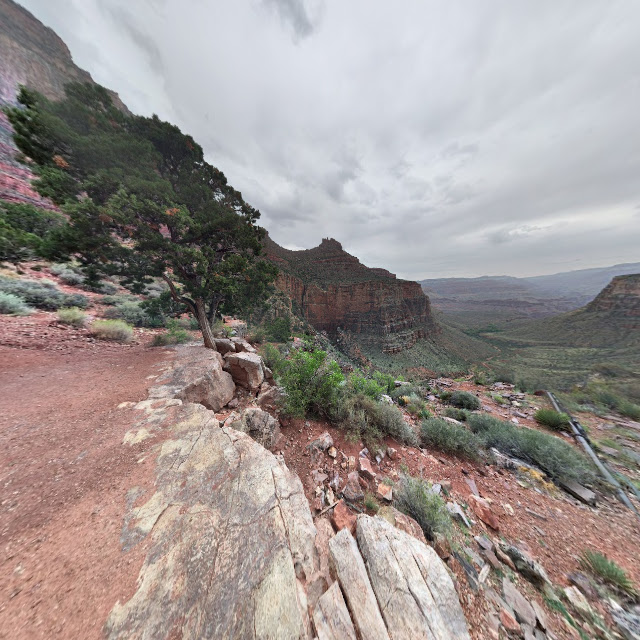 Open in 360° mode
The Grand Canyon is a famous canyon in Arizona, formed by the Colorado River. It is a UNESCO World Heritage Site, and a National Park of the United States. It is also one of the Seven Natural Wonders of the World. The Grand Canyon is 446 km long, up to 29 km wide and is over a mile 1.8 km deep in places. Nearly two billion years of the Earth's geological history have been exposed as the Colorado River and its tributaries cut their channels through layer after layer of rock while the Colorado Plateau was uplifted by tectonic action.

shareinfo_outlinestar_border
Open in 360° mode
San Francisco Bay is a shallow, productive estuary through which water draining about forty percent of California, flowing in the Sacramento and San Joaquin rivers from the Sierra Nevada mountains and Central Valley, enters the Pacific Ocean. Technically, both rivers flow into Suisun Bay, which help flows through the Carquinez Strait to meet with the Napa River at the entrance to San Pablo Bay, which connects at its south end to San Francisco Bay, although the entire group of interconnected bays are often referred to as the San Francisco Bay.

shareinfo_outlinestar_border
Open in 360° mode
The International Space Station (ISS) is a space station, or a habitable artificial satellite, in low Earth orbit. Its first component launched into orbit in 1998, and the ISS is now the largest human-made body in low Earth orbit and can often be seen with the naked eye from Earth. The ISS consists of pressurised modules, external trusses, solar arrays, and other components. ISS components have been launched by Russian Proton and Soyuz rockets, and American Space Shuttles.

shareinfo_outlinestar_border
Open in 360° mode
The Moon is an astronomical body that orbits planet Earth, being Earth's only permanent natural satellite. It is the fifth-largest natural satellite in the Solar System, and the largest among planetary satellites relative to the size of the planet that it orbits (its primary). Following Jupiter's satellite Io, the Moon is second-densest satellite among those whose densities are known.

shareinfo_outlinestar_border
Open in 360° mode
Mars is the fourth planet from the Sun and the second-smallest planet in the Solar System, after Mercury. Named after the Roman god of war, it is often referred to as the "Red Planet" because the iron oxide prevalent on its surface gives it a reddish appearance. Mars is a terrestrial planet with a thin atmosphere, having surface features reminiscent both of the impact craters of the Moon and the valleys, deserts, and polar ice caps of Earth. 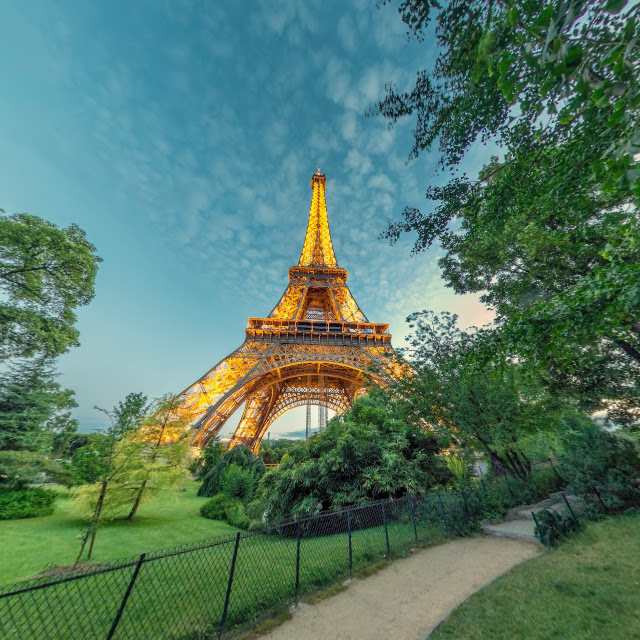 Open in 360° mode
The Eiffel Tower is a famous landmark in Paris. It was built between 1887 and 1889 for the Exposition Universelle. The Tower was the Exposition's main attraction. It was built by Eiffel for the 100th year of the French Revolution and it is 324 metres (1,063 ft) tall. 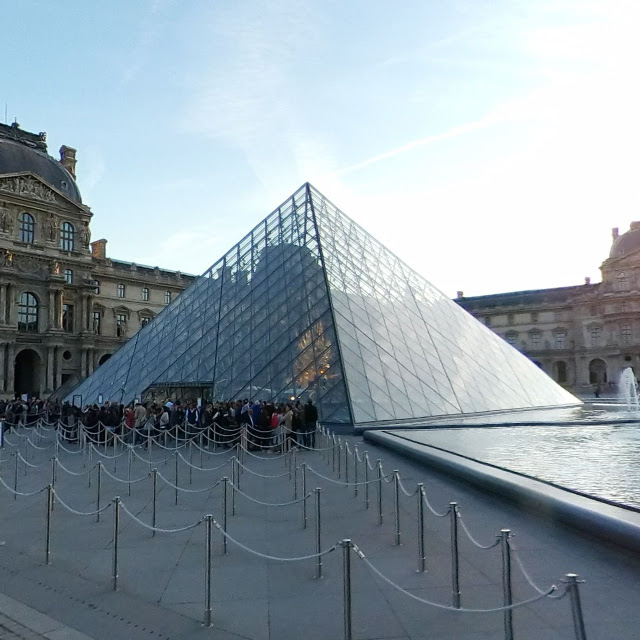 Open in 360° mode
The Louvre is a museum in Paris, attracting millions of visitors every year because of its art collection. It is the most popular art museum in the world. 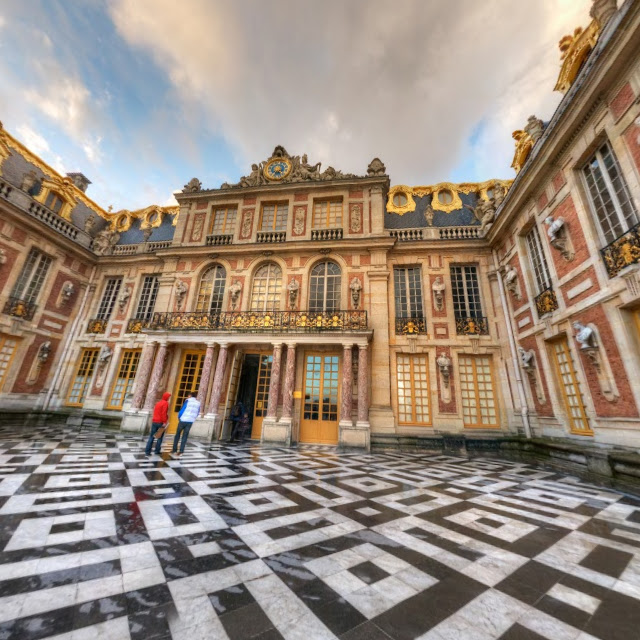 Open in 360° mode
The Château de Versailles, or simply Versailles, is a royal castle in Versailles, France. In English one often speaks of the Palace of Versailles. When the castle was built, Versailles was a country village, but it is now a suburb of Paris. From 1682, when King Louis XIV moved from Paris and lived in this palace, until the royal family was forced to return to the capital in 1789, the Court of Versailles was the centre of power in the Ancien Régime. Versailles is therefore famous not only as a building, but as a symbol of absolute monarchy. 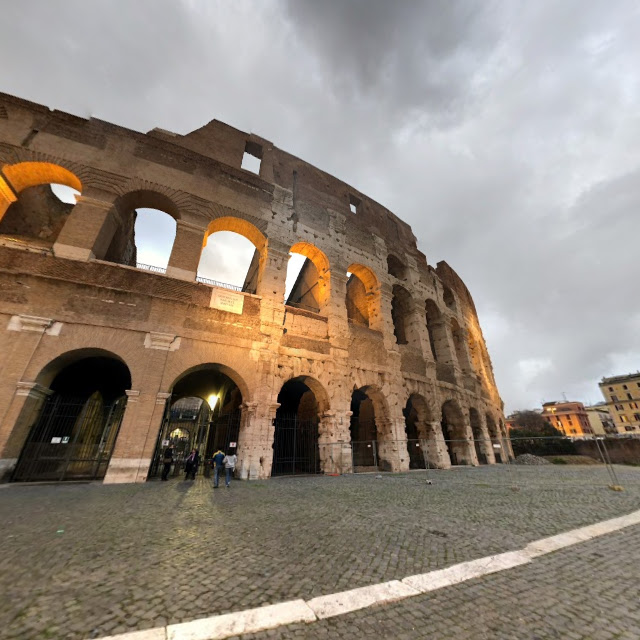 Open in 360° mode
The Colosseum, originally known as the Flavian Amphitheatre, is a large amphitheatre in the city of Rome. The construction of the Colosseum started around 70–72 AD and was finished in 80 AD. Emperor Vespasian started the work, and Emperor Titus completed it. Emperor Domitian made some changes to the building between 81–96 AD. It had seating for 50,000 people. It was 156 metres wide, 189 metres long and 57 metres tall. It is the biggest amphitheatre built by the Roman Empire. 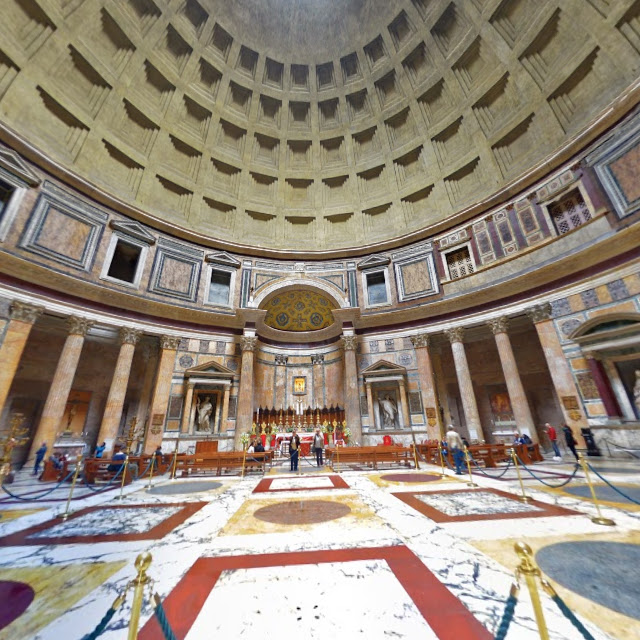 Open in 360° mode
The Pantheon is a building in Rome. It was originally built as a temple to the gods of Ancient Rome, and rebuilt about 126 AD during Hadrian's reign. Today, it is not known what gods were included. The Pantheon is the best preserved of all Roman buildings. Since it was built, it has always been used. The design of the current building is sometimes credited to Trajan's architect Apollodorus of Damascus, but it may also been Emperor Hadrian's architects who designed it. 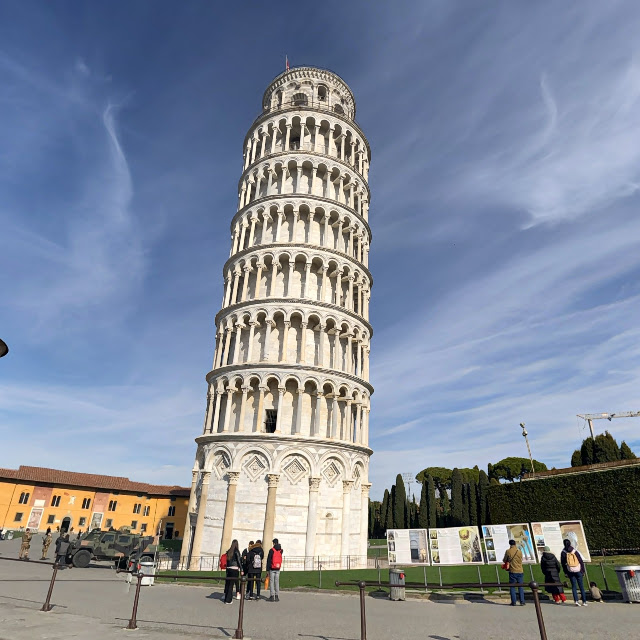 Open in 360° mode
The Leaning Tower of Pisa is a building in Pisa, Italy. It is a bell tower. It is famous because it is not vertical. In 1990 the tower was leaning at 5.5 degrees and increasing. After that, much restoration work has been done to stop it from falling over completely. There was scaffolding all around the tower for 20 years. On 26 April 2011, the last bit of scaffolding was removed so that the tower can be seen properly again. 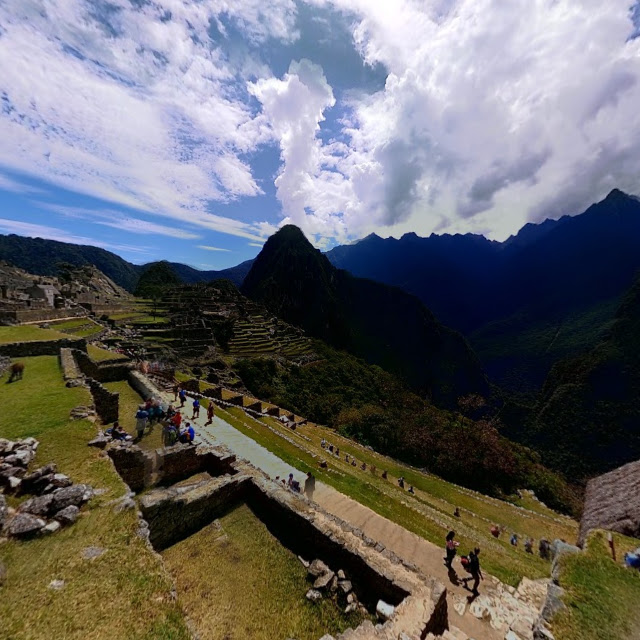 Open in 360° mode
Machu Picchu is a pre-Columbian 15th-century Inca site in Peru, in South America. The Incas built the city on a mountain ridge, 2430m above sea level. They lived there between 1200 and 1450 AD. Other people lived there before about 650 AD. The Incas built houses, fields and temples by cutting the rock on the mountain so it was flat. They built an Observatory to look at the stars.

shareinfo_outlinestar_border
Open in 360° mode
The Taj Mahal is a white tomb built in the 17th century by the Mughal emperor, Shah Jahan in memory of his wife, Mumtaz Mahal. The building is in the city of Agra, Uttar Pradesh. Widely thought as one of the most beautiful buildings in the world, it is one of India's biggest tourist attractions. It is listed as a UNESCO World Heritage Site, together with the Agra Fort, 2.5 kilometers away. It was listed as one of the 7 Wonders of the World in 2007. 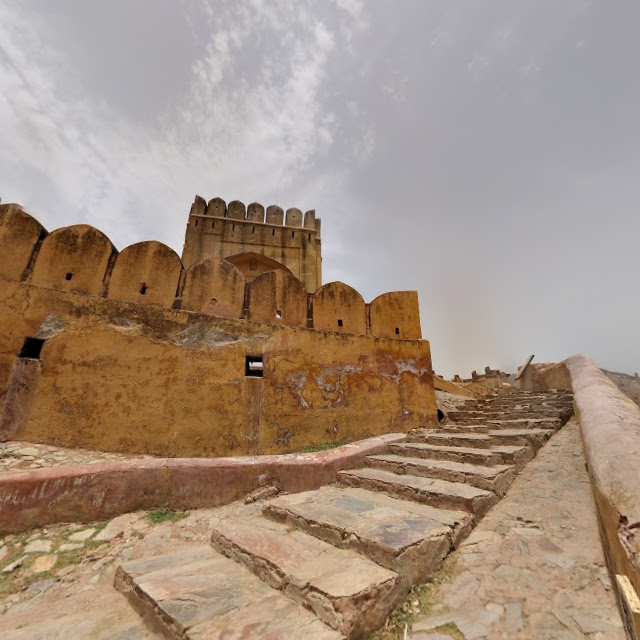 Open in 360° mode
Amer Fort is a fort located in Amer, Rajasthan, India. Amer is a town with an area of 4 square kilometres (1.5 sq mi) located 11 kilometres (6.8 mi) from Jaipur, the capital of Rajasthan. Located high on a hill, it is the principal tourist attraction in Jaipur. The town of Amer was originally built by Meenas, and later it was ruled by Raja Man Singh I. Amer Fort is known for its artistic style elements. With its large ramparts and series of gates and cobbled paths, the fort overlooks Maota Lake, which is the main source of water for the Amer Palace.

shareinfo_outlinestar_border
Open in 360° mode
The Red Fort (Lal Qila) is a monument built in 1638 that rises 33 meters (108 ft) above Old Delhi. It was built by the Mughal Emperor Shah Jahan. The fort is located in what is now the centre of Delhi, India. It is made of red stone and marble. It was built on the right bank of the Yamuna River.